There are some distinct benefits—and some drawbacks—when designers choose to take on the task of turning their own private residence into their next big design project. Con: it's true when they say that you're your own worst critic—and when it comes to the homes and the character of most designers, even the best can be done better. Pro: designing your home truly is a labor of love. Here's a sneak peek into my own home, my goals for the space, and how the talented team at Kalu Interiors brought my vision to life. 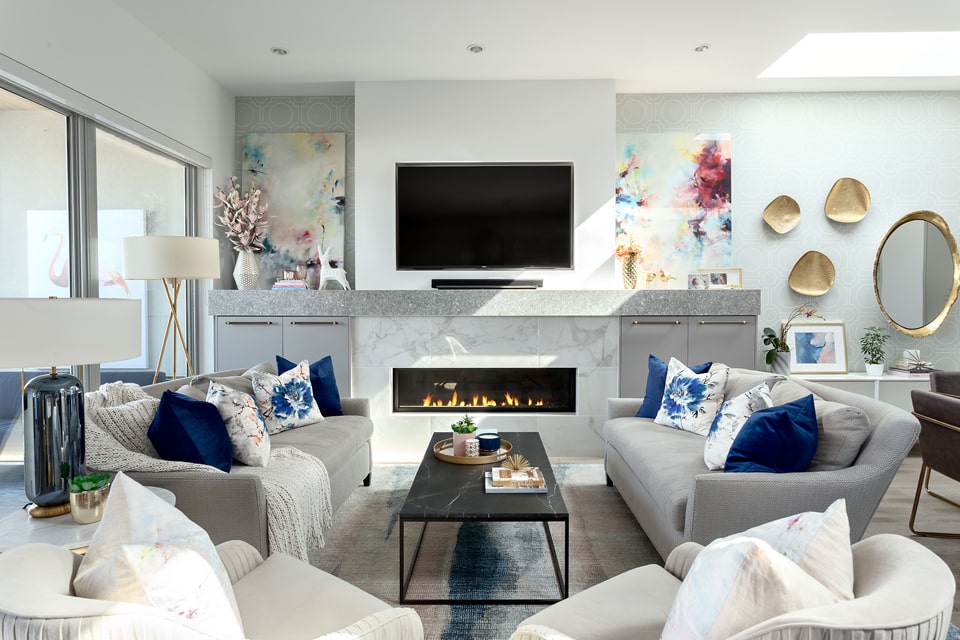 The house is a 4,000-sq.-ft. space located in North Burnaby, BC. This charming neighborhood has influenced the home's aesthetic and its vibe, which is laid-back yet luxe, and totally a-la-mode. These characteristics became my personal goals for the space, and starting from scratch (did I mention that this was a brand new build?) allowed me to incorporate my wish-list into the home from the get-go.

At Kalu Interiors, one of the most-common requests we receive from clients is for open-concept floor plans, and this project was no exception. I wanted my home to be bright, spacious and "flowing." Translation: wall-less. The open-concept interior first rose to fame in the 1990’s and the trend is still very much alive today. Modern homes are rarely built with the traditional, small rooms that were so commonplace pre-1990. And those older homes and their many rooms are now the subject of renovations, often being re-invented with those beloved open interiors that are so conducive to the natural, unobstructed flow of light, views, foot traffic and conversation.

For those who may be weary of this layout and lifestyle, "open-concept" doesn't have to mean completely void of walls. In this home, as in many others, the kitchen, living area and dining area are open to one another; harmonious in their aesthetics, but clearly defined in terms of their functions through thoughtful furniture placement and a few other tricks of the design trade. 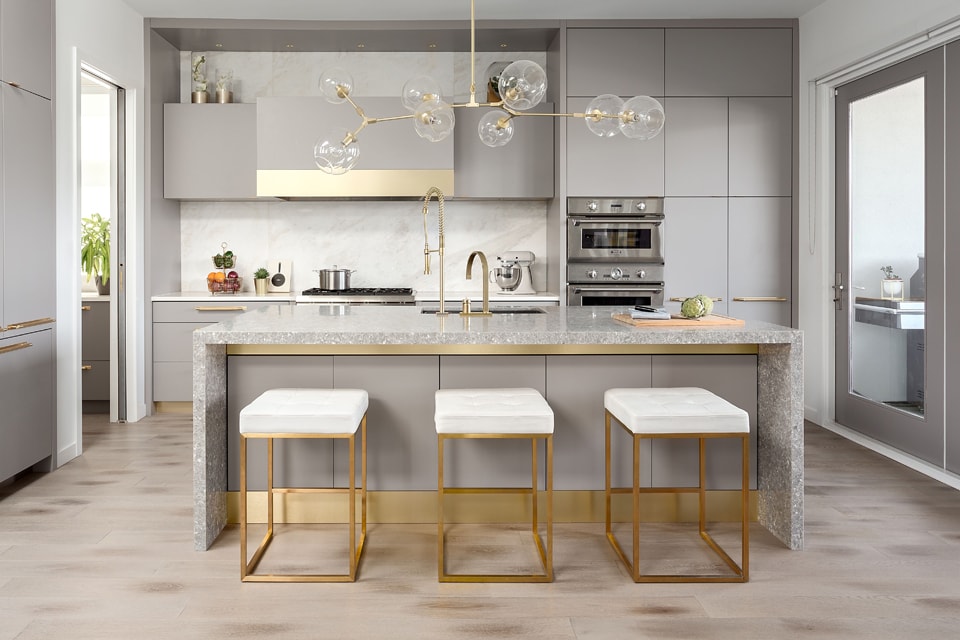 In this kitchen, my objective was to give the space a luxurious, yet modern look and feel. The cabinets are painted in one consistent colour—a warm gray tone that serves to warm up the "temperature" of the entire space, seeing as this hue covers a large visual area. Pops of brushed gold punctuate the custom-made kitchen island and the custom hood fan, adding an element of luxury to the space. The same trendy gold finish is then carried through in the cabinetry, proudly boasting Buster + Punch handles—a fine detail that's worthy of a little bragging, in my opinion.

To help blur the boundary between the kitchen and living areas, a large display niche was incorporated along the top of the stove area, giving the kitchen a high-end custom look. Appliances are paneled where possible; giving them a "furniture" look that is seamless and easily maintained.

Organic materials are a natural complement to the warm grey colour of the cabinets. A grey-veined marble slab backsplash serves as an elegant backdrop between the stove and hood fan, and continues behind the display niche above the cabinets. Quartz countertops in white were equally chosen for their durability and style. Meanwhile on the island, we selected quartz in Silestone Ocean Jasper featuring a mitred waterfall style, making the island even more of a centerpiece.

As they say, it's all in the details. Suspended over the kitchen island, an oversized Avenue Lighting chandelier adds presence, but the fixture's simple glass globes don't overwhelm the space. Rising up from below, the faucet was chosen for its sleek lines and elegant form. But function doesn't take the back burner - this beauty features both a faucet and side-spray, which is great for cleaning up.

Hidden Secret: A wok kitchen was added adjacent to the main kitchen, and is often used for heavier cooking and acts as a secondary kitchen while entertaining. (Tip for the host: never let your guests see you break a sweat!) The wok kitchen is also outfitted with a Fisher Paykel single-dish drawer to help with the post-party clean-up.

The back wall of the kitchen features eclipse-style stacker doors that keep the space's open-concept feeling going - right into the outdoors! The glass doors flood the space with natural light and fresh air, and they allow for flexibility while entertaining, opening up to the patio.

The rest of the kitchen is open to the living and dining areas. For these "rooms" I wanted to maintain a sense of ease to balance the formality found in the kitchen. Items chosen for these spaces were meant to lighten up the vibe of the overall space. The wallpaper is subtle, but adds a layer of character. Colours were kept airy and light, with punches of a rich, royal blue that acts as a much-needed punctuation mark. 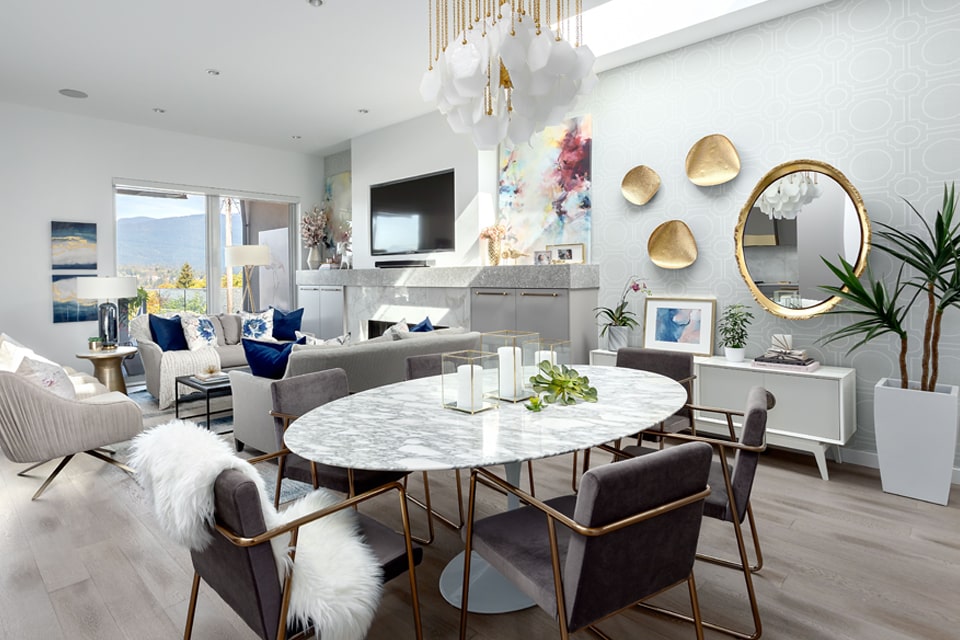 The richness of the kitchen is echoed throughout the living and dining areas, with the marble-look porcelain tile surrounding the fireplace and appearing in the marble detail of the coffee and dining tables. The furniture silhouettes are less formal, but the velvet textures elevate the pieces, again bringing a touch of formality to the otherwise laid-back look. Pops of gold are found throughout the space—especially in the Jonathan Adler chandelier, which acts as the focal point of the dining area. A pair of skylights on either side of the dining table offers an alternate route for natural light to flow into and through this open-concept floor plan.

This home was named a regional finalist for an Ovation award in the "Best Custom Home - $1 Million to $2 Million" category. More importantly, the blank canvas is now a reflection of my character, my lifestyle and my surrounding neighbourhood. To me, this has become "home" in every sense of the word—and isn't that every homeowner's ultimate goal?

Award winning Interior Designers Phyllis Lui & Aleem Kassam are the Principal designer duo for Kalu Interiors. For more than a decade this Vancouver based design firm has become known and focus on creating thoughtfully curated interiors that enhance and inspire how you live. The firm provides bespoke design services for clientele throughout Canada. kaluinteriors.com. @KaluInteriors